I hereby announce my campaign to snailmail all 535 United States Congresspeople personalized letters before the year is out, in favor of a genuine, government-run public option. So far I’ve snailmailed 4; 531 to go.

Here’s sufficient info to learn how to snailmail members of the US Congress, regardless of what your stance is on whatever issue. Here’s a frequently-updated priority list of which US Congresspeople to contact in favor of a genuine public option, though you of course might choose others to write.

Maybe you doubt the efficacy of writing US Congresspeople. I understand, especially when, for instance, the pharmaceutical and health product industries lobbied the US Congress $1.2 million per day in the first three months of 2009 (not counting advertising & other efforts, including whatever’s under-the-table). Despite much information to the contrary, citizen snailmail (especially when personalized) does reach US Congresspeople, or at least their staff, without too much delay. Evidence:

To prove that I’m serious about my campaign, below I’ll post the letter I sent US Representative Nancy Pelosi yesterday. In an attempt to protect myself against discrimination and stigmatization, I censored out a very small portion of the letter, though presumably the letter is now public record somewhere. I’ve also PDF’ed the letter so you can see the formatting in case you want a guide for your own snailmail. Because you’re going to write your own personalized letter(s) — or do something equivalent or better — right?

The Honorable Nancy Pelosi
Office of the Speaker
H-232, US Capitol
Washington, DC 20515

I’m writing to support your insistence that a healthcare reform “bill without a strong public option will not pass the House” (your Press Release, 3 Sept. 2009), to agree with your statement that if “a vigorous public option is not included, it would be a major victory for the health insurance industry” (your Press Release, 3 Sept. 2009), to ask you to continue to insist on a strong, government-run public option — which, as you know, does not mean a co-op plan such as that of Senator Max Baucus — and to ask you to fight any spin attempting to pass off a co-op plan as a “public option.” I’m a self-employed writer and tutor in Fort Worth, Texas, and, just out of college, I’m working toward a public-school teaching certification. Like many Americans, I have a pre-existing condition — in my case, [type of pre-existing condition]. I lose my BC/BS disability coverage in February.

My medicine for this one illness alone costs nearly $1000 per month. Without reliable health insurance, I cannot responsibly teach public school. Sure, a school would provide me with group coverage, but what if I were laid off? COBRA only goes so far; high-risk pools only go so far. Just as you chose a career in civil service to help others, so I want to help others, and a government-run public option would give me a strong safety net so I could focus on teaching. A co-op plan wouldn’t have the membership clout needed to compete with private insurance. The Iowa state government tried a nonprofit co-op — and it died in two years (New York Times, 17 Aug 2009). Just like a trigger plan, a co-op plan would take longer to start than a government-run plan, and we don’t have any more time. According to a 2007 American Journal of Medicine study, an American family files for bankruptcy in the aftermath of an illness every 30 seconds. In 2009 the Center for American Progress explained that every day, 14,000 Americans lose their health insurance: 2,190 in your state, 470 in mine. Every day. It is a moral issue.

Thank you for fighting in favor of a strong, government-run public option. Please keep fighting.

I hereby announce my campaign to snailmail all 535 United States Congresspeople personalized letters before the year is out, in favor of a genuine, government-run public option. So far I’ve...

DFW.com, a print and online magazine based in Dallas-Fort Worth, just published a story about me and other artists — singer Tatiana Mayfield, actor Brian Daniels, and painter (and personal friend) James Lassen — working during the recession. 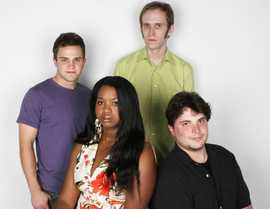 The interview and photo-shoot experiences were really fun. I’m glad people are paying attention to local artists during a time when not many are. DFW.com is a fun site — you should check it out anyway; my girlfriend Kate and I found a really cool hangout, Gallery Art Cafe, through DFW.com’s highly searchable directory of local restaurants.

DFW.com, a print and online magazine based in Dallas-Fort Worth, just published a story about me and other artists — singer Tatiana Mayfield, actor Brian Daniels, and painter (and personal...

The public option, says the Chicago Tribune in 2009, is a “government-sponsored insurance policy [that] would be offered alongside private plans.” It’s a Medicare-like option American citizens could select voluntarily if they so desired, they already pay for other public goods/services ranging from air traffic control to zoos.

In an effort to take some of the right-wing food coloring out of the swimming pool, here’s some information, as opposed to dis-information. By itself, the information below doesn’t prove the public option a good thing (though the public option is a good thing). But it does make you sigh and wonder where the hell the (representational, constitutional) United States democracy has gone off to. Here’s a hint about some of the above-the-table answers.

If you hate the public option but still want a lesson out of this, it’s that you should look at primary sources as much as possible when learning stuff. Preliminary research seems to indicate teens today, for example, have practically no media literacy training and typically don’t think about sources’ credibility.  Finally, you should watch President Obama’s speech about healthcare reform tomorrow (Wednesday September 9th), which might change the ballgame quite a bit.

N.B. The information below is subject to irrelevancy as time marches on.

Click the graph below to see that the American citizenry definitely supports the public option. Sources: Quinnepac (July); Washington Post / ABC (June); New York Times / CBS (June); Wall Street Journal / NBC (June); if you want the others, you could start by looking at the source information near the bottom of this page.

A supposedly Chinese curse says, “May you live in interesting times.”

The public option, says the Chicago Tribune in 2009, is a “government-sponsored insurance policy [that] would be offered alongside private plans.” It’s a Medicare-like option American citizens could select voluntarily...