This month CBSDFW.com, the website for KTVT, the CBS station in Dallas – Fort Worth (that’d be channel 11), published some ‘Best of’ pieces I wrote for ’em. Here they are, with a tiny excerpt of each.

They were fun to write. I haven’t ever seemed to initiate discussion about any of my writing that’s been published, and I’m continuing that trend now. After publication, my primary role in a text’s life is basically done, save I guess for fixing typos or something in a theoretical reprint of whatever.

So: they were fun to write. Really! =D Hope you enjoy.

This month CBSDFW.com, the website for KTVT, the CBS station in Dallas – Fort Worth (that’d be channel 11), published some ‘Best of’ pieces I wrote for ’em. Here they...

Whoa, I just earned actual money by writing and self-publishing fiction without an agent or a publisher or an editor or an acquisitions editor. Without any other gatekeeper. The point of this post isn’t the handful (or less) of euros, but another anecdote supporting the march toward what might well be a new paradigm for publishing.

I’ve received fan mail for the story; again, this is not to brag, but to point out that netizens actually read and enjoyed the piece without mediators between them and me. (Artistically, critiquers helped me, of course; and, there are Dreamhost and Flattr and other web companies/organizations, plus the overhead cost of running this website. So in a very loose sense there are, if not mediators, connectors.)

The money came because someone I’ve never met flattr‘ed — donated in favor of — my short story “Glenn of Green Gables,” which I self-published under a Creative Commons license.

The license allows readers to share (copy) and remix (adapt; e.g., translate) the story so long as they do so on a noncommercial basis, give my name and my story attribution & linkage, and license any remix/adaptation they make similarly. In other words, share the story all you want, freely, and do something cool with it, unless it involves plagiarism or making money. (If you’re Hollywood, email me.)

Yeah, download the short story, the whole thing, and toss a few coins in the tip jar on my digital street corner here where I’m being your bard.

I think magazines and publishing houses are still very necessary. They provide authors with infrastructure for, say, interviews and book tours, among other functions. (After all, most artist types aren’t the greatest biz folk at promoting themselves.) Houses help readers choose between fiction based on reputation. They connect authors with communities and with editors — though tons of editors are already freelancing outside the umbrellas of publishing houses. AND magazines and publishers still have bigger bullhorns than many websites (including mine), bigger wallets than micro-donaters, and they typically bestow more credibility (for opportunities such as speaking gigs) than self-publications. So, sure, I definitely still want to get a bunch of stories past gatekeepers. They’re not all bad or anything!

But the bottom line: in order to connect with readers and score some pocket change, I won’t have to have gatekeepers’ approval. Not anymore. Score one for the Internet.

Whoa, I just earned actual money by writing and self-publishing fiction without an agent or a publisher or an editor or an acquisitions editor. Without any other gatekeeper. The point...

This post is the sixth in a series of ten about my experiences at Clarion West Writers Workshop (Wikipedia) as a member of the 2008 class. I’ll talk about Week 4 of the workshop, when Connie Willis (Wikipedia) instructed. Here are Parts 1, 2, 3, 4, and 5 of the series. In Part 5 I discussed Cory Doctorow‘s week and ended with a somewhat bizarre dismantling of my psyche. This post is quite the opposite: I brag. Bear with!

“Total exhaustion is the goal,” Mary Rosenblum said, teaching Clarion West during our Week 2, and by Connie’s Week 4 I was totally exhausted; that’s clear to me now as I read over the emails I sent friends and family during that middle of July ’08. In those emails I also now detect a down-on-myself attitude about my fiction-writing, one that I don’t particularly experience anymore (knock on wood). These days I get dejected or grumpy about my fiction-writing at times, of course, but I don’t feel such negativity, pessimism, or bewilderment about the whole process. I have strong confidence in my abilities, and faith that new stories will turn out right eventually, that I’ll be able to revise them into artworks I’m proud of. That confidence is due in part to Wifely Kate, additional and diverse employment experiences, and other factors; but, a huge chunk of it has definitely come from Clarion West. This benefit from Clarion West took a long time to set in; I’ve had to incorporate what all I learned into my writing and my life, and that took me quite a while.

Outside the Clarion West spaceship: replica of Seattle

The additional confidence from Clarion West hasn’t derived so much from the grab-bag of tips I picked up from the instructors or my fellow students (though these have helped!), nor was it any sort of confirming validation that other Clarionites sometimes mention. I gained so much, I think, from the way a Clarion workshop primarily focuses on the process of revision, not creating an ultimate and spotless draft; and, second, making weird friends who accept me for my weirdness-es was an invaluable gift. As Kate puts it, I found my people, my tribe. 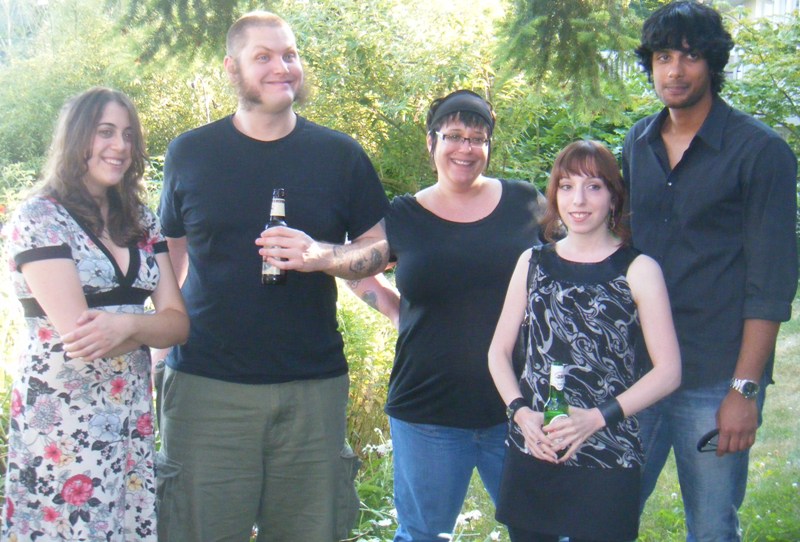 About Clarion’s focus on revision — writing and life are pretty much driven by storytelling, or at least by motifs that recur and recur, carrying with them their old meanings and acquiring new ones as they go. I’ll have more to say about how this works when I get to my Week 6 post (the forthcoming Part 8), but for now, the emphasis on revision, the way instructors and fellow students took specific elements of stories and suggested specific changes (with reasons!), gave a real sense that one’s own fiction can work, after all, that the poor draft you wrote does indeed have potential in it. There’s a real feeling of hope there.

Which is why I shouldn’t have been so down on myself. My Week 4 short story was an unfortunately convoluted mystery. I came up with the story from absolute scratch — not even a vague idea of the story before the workshop — which was a specific challenge I’d set myself before arriving at the space station (the Workshop mysteriously floats in orbit over Seattle). In the emails, instead of feeling glad I about actually succeeding at this task I’d set myself, I was all down on how the story didn’t “work.” Well, pretty much no first draft ever works. And, no matter how bungled, the first draft had cool ideas. Why be so negative?

Connie told us it took her eight years of writing before she sold a story; she also asked each of us to tell the group how we started writing. The answers varied; some knew since birth, it seemed, and others were late bloomers. Me? I wanted to be a writer as a kindergartner, but soon switched my hoped-for career to astronaut; in middle school I made up stories often, but then switched to music. When for various reasons I determined a music career was not for me, I tried writing again, and after a few months, maybe even only after a full year, I began to enjoy it. I hope people reading this who are searching for their own directions, whether as a writer or otherwise, come to feel patient with their search. Often — and the psychologist Csíkszentmihályi (gloriously pronounced “Chick-sent-me-high”) makes this point — it can take learning time before you enjoy a career path. For many, beginning to play, for example, tennis (maybe at the behest of a friend) isn’t very fun: all those frustrating, misguided racket swings and terrible serves. But once you can get to where you can actually play not too shabbily, the fun and satisfaction finally starts setting in. If you give up on a career path without giving yourself time to get some basic proficiency, you probably haven’t really tried at all. 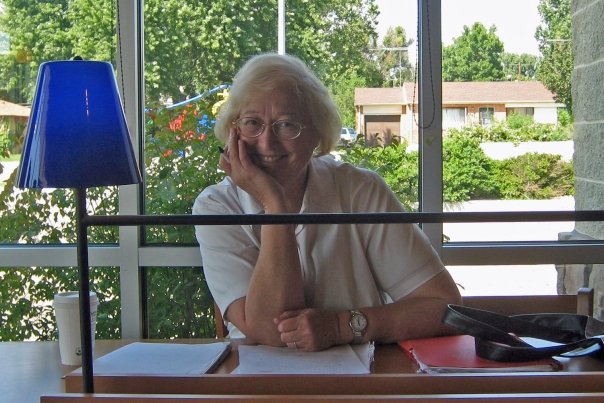 More about Connie. She’s a frequent master of ceremonies at science fiction & fantasy events, a respected dame in the field. She was one of the instructors who hung around our quarters of the space station in her spare time, answering questions and just visiting. Before I went to the Workshop, I read one book by each instructor; for her I selected Passage. The book was fast-paced and straightforwardly written — and also very moving. Highly recommended. She’s a real expert at plot.

Her advice mostly centered on plot, too. Here are some of her tips I collected; she gave the caveat that her advice was only her advice, that we should feel, like Agatha Christie, free to break any rules.

But I should note first that during Week 4 an anonymous friend sent me a replacement copy of Peter Straub‘s If You Could See Me Now; the copy I brought with me, oddly, was missing a page. I found it helpful to have a book with me that was totally unrelated to Clarion West. Really reading it was impossible, due to the total exhaustion, but being able to dip into a page here or there and disappear from the Workshop was refreshing.

Connie also gave us each a critique coupon to snail-mail her along with a short story or novel opening, if we wanted. Finally, a tidbit: in interviews she’s mentioned that when she was very young, she read the fiction section at her local library in alphabetical order. At the space station I asked her how far she made it through the alphabet. I believe her answer was H, that reading Heinlein made her switch to reading all the library’s science fiction.

As I’ve said throughout this series, writing these Clarion West posts induces in me a unique sort of stress that I don’t fully understand; I feel, maybe, as if I’m just not describing the time well enough, not at all portraying just how transformative and wonderful the Workshop was — that these posts are somehow doing violence to a great gestalt from a time that’s gradually starting to feel like long ago. Maybe that’s why I delay these posts: to hang on to my Clarion West experience.

One thing that continues on, however, are my classmates, our relationships. They’re all people I treasure; mostly we keep in touch, sometimes through our email list, sometimes with individual phone calls, even trips here and there.

One way or another, see y’all special Clarionites soon. ;-)

This post is the sixth in a series of ten about my experiences at Clarion West Writers Workshop (Wikipedia) as a member of the 2008 class. I’ll talk about Week...