Saturday night, December 11, I went to a Rammstein concert at Madison Square Garden, my ticket purchased by the best wife ever, Wifely. At the Garden, for about 2.5 hours, the band wonderfully bulldozed my ears. The full set list’s at the end of this post.

To get to the concert, I took the D-line from my friends Janna and Julie’s apartment in the Bronx, then walked a few blocks through Manhattan. A hand-holding, formally-dressed teenage couple arrived at about the same time I did, also threading their way through the assortment of headbangers in fishnet stockings and/or leather jackets & the like. The couple showed an elderly usher their tickets. “No,” he told them, “you don’t want a Rammstein concert.” He gestured. “You want that over there, the stage play.” 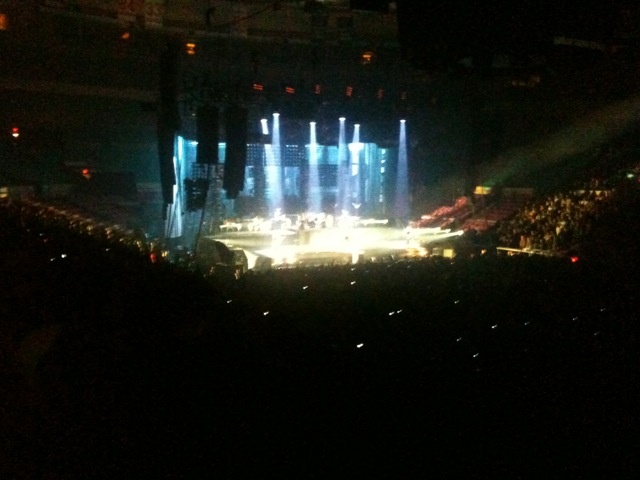 Luckily, I (purposefully) missed the opening act, some obnoxious group called Combichrist. I sat (with a great view! How awesome is Wifely???) next to a guy named Kirk, with whom I talked for a while; his girlfriend goes to NYU, he studies education in Pennsylvania.

I wondered if the techs soundchecking the guitars were going to play the main Sweet Leaf riff (the Black Sabbath song title refers to especially tasty tea), or if the tradition of using that riff for metal soundchecks was just an American thing. Well, Rammstein’s soundcheck was really short, which was sort of surprising — just a kick drum check and a power chord check. I have to say the kick drum sounded incredible reverberating around Madison Square Garden.

The lights blacked out suddenly, and after a Spinal Tap-worthy smashing of an artificial wall, the band came onstage for the night’s first song, “Rammlied” (“Ram-song”). The lyrics start with (and frequently repeat) the word “Rammstein” (Ram-stone), which the crowd loudly screamed, fists pumping and heads a-bang, as a very emphatic spondee. I was definitely among the fist-pumpers, for once at a concert where I wasn’t so self-conscious. When the German verses begun, the largely American audience’s fists lowered, their heads rose, and their faces searched one another, puzzled as to how to proceed. Then the chorus came back (Ramm-! -stein!) and the crowd resumed its chant. Any German the crowd managed seemed mostly mumbled until a familiar-enough word crossed by. This was amusing. For all we knew, Till Lindemann, singing mostly in German, could have been cursing us out the whole time!

Here’s what the music sounded like — seriously! Did I not tell you Rammstein plays Bavarian folk music?

During “Ich tu dir Weh” I saw, through the scrim of pot smoke pouched above the bottom floor, a man dressed head-to-toe as Santa Claus, moshing in the pit as intensely as anyone else. Like the band themselves, most Rammstein fans above their teenage years do have a sense of humor about this music and its subculture.

The concert ended with Till enunciating very slowly and very carefully, something like: “We are Rammstein. We thank you very, very much, America.” The closing song was “Engel” (“Angel”), and we walked out to a piano rendition of it, which was quite spooky and nicely fit my sudden sadness at the concert ending. I was so happy, though. On the way back to the Bronx on the D, my ears were, like, deaf, so on my headphones I listened to Patty Griffin, not coincidentally among Wifely’s favorite music.

By the way, before the concert, some guy standing by the elevators handed out what looked like playbills to passersby, some of whom happened to accept them. On the back, I noticed, MSG Entertainment, apparently Rammstein’s management — whom as a ticket-holder I have no relationshp with — asserts the following (though in all caps, and among other things) as part of a “license” (their word) that they granted:

No smoking, alcohol, drugs, weapons, laser pens, food, bottles or cans allowed. By your use of this ticket, you consent to a reasonable search for prohibit items and you agree that you will not transmit or aid in transmitting any description, account, picture or reproduction of the event to which this ticket admits you.

Apparently in Germany they don’t have the saying “Any publicity is good publicity.” And besides, just because some moistened bink lobbed a playbill at me doesn’t make me a licensee.

For a disturbing, if overblown, take on Rammstein, try this essay by Claire Berlinski: Rammstein’s Rage. (FYI, at times the essay mis-translates in a way that misleadingly bolsters its points; but, it’s still worth a read.)

Saturday night, December 11, I went to a Rammstein concert at Madison Square Garden, my ticket purchased by the best wife ever, Wifely. At the Garden, for about 2.5 hours,...