September 11 in Seattle saw a moderate-size crowd sweating anxiety away in the Eastlake neighborhood before two Lo-Fi nightclub stages, where four local acts supported four bands all the way from Guadalajara for Flower Fest 3. The festival made a nice way to compare and contrast Mexican rock with rock developed from within the Five Eyes states (FVEY: US, UK, Canada, Australia, New Zealand). That’s a term a little more specific—this writer pedantically notes—than “the Anglosphere,” which would include states such as Jamaica and South Africa where presumably (please correct in comments if wrong) local bands produce a very different sound than either Guadalajarans or FVEYers. 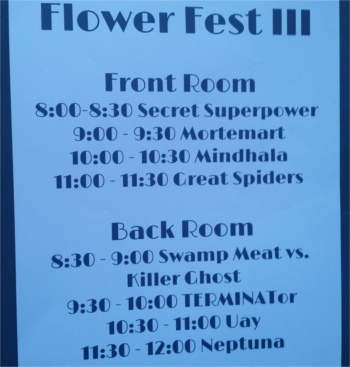 So how does music from México’s second most populous municipality differ from today’s Emerald City sound? First thing to know, if you’re reading this from outside the Pacific Northwest, is that grunge is basically over here. The four USian groups who played constituted two pop punk bands (one, Secret Superpower, easy on the ears and one, TERMINATor, more challenging), a heartfelt acoustic guitarist-singer with a bassist backing him up (Great Spiders), and a set of very talented, medium-hard rockers (Swamp Meat vs. Killer Ghost).

The highly enjoyable Seattle bands are, in the grand scheme of things, not too different from what you’d likely hear on a college radio station in any U.S. port city. Imagine 4/4 time, some nifty idiosyncracies sprinkled in, familiar instruments to hear for a respite at the bar … and you have the general idea. But what about the sound from south of the border?

Now let’s see how that simplistic binary plays out or doesn’t with each individual act. One caveat: I couldn’t make out lyrics of any band, so this is solely judging based on audio. And for extra explicit dorkiness, images of Guadalajarans are aligned right, and Seattleites are aligned left.

Seattle on the left meets Mexico on the right First up, locals in Secret Superpower (Soundcloud) sounded a bit like Garbage in a good mood, with Daniel Cutting’s steady drumming and Kira Wilson’s distorted bass underpinning guitarist Paige Spicer’s warm chords. The trio’s dreamy songs welcomed the night in well. For those who showed up early, Secret Superpower enjoyably situated the evening in the context of familiar female-fronted rock, with their own almost retro spin—happiness is too often uncool these days, but like yesteryear, Secret Superpower didn’t fear to put a smile on audience faces. Next came two local bands in one: Swamp Meat (Bandcamp) vs. Killer Ghost (Bandcamp). The first song of this badass conglomerate of bands featured a rumba-like drum beat that really showed off drummer Daniel Onufer’s confident playing. The second started off with a military-style march on his authoritatively cracking snare while Laura Seniow fingerplucked her bass and Lila Burns added sweet guitar melodies. Onufer’s confidence extended to dropping a stick and retrieving it without missing a beat and singing (and singing well) while drumming. The other guitarist, Sharif Ali, let loose with passionate vocals too. If there’s one word for this superband it’s confidence. Their skill breaks my binary already, because they inserted unusual rhythms that ventured outside radio norms. 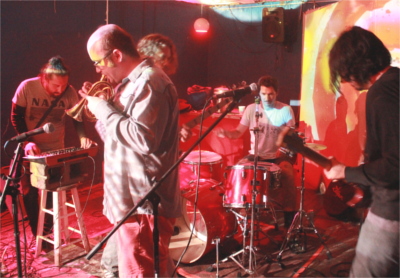 Third, a loud noise intro said shit was about to get serious with Guadalajaran psychedelic rockers Mortemart (Bandcamp). Synth player Chaka—fittingly dressed in a NASA T-shirt—guitarist Albert and bassist Kiaran constructed a rumbling howl that caused showgoers to instinctively look around at the P.A.—would it hold? Would our eardrums? With the independence viajeros have, Mortemart didn’t worry about audience reaction and kept going. With his bucket cornet, Eric issued plaintive cries over the aural thunder. Then Daniel’s drums kicked in with a driving beat on the floor toms, the horn’s perfect-fourth agonies now almost lost in the rumble. Kiaran’s bass grooved hard with an octave-based pattern and it was clear the rhythm section would put passion into every simple note as the soundscape continued to be built around us. Chaka even inserted some video game-like bloops and beeps into the strange mix. This writer bought Mortemart’s album Overthinking via Bandcamp and you should too—check out the song “The Healing part 2.” The album versions are far less experimental than the live show, which is good for iterated listening. Put the shoe on the other foot, and it’s a hard time imagining notoriously homebound USians traveling to Guadalajara and repeating this show of confidence. But hopefully someday! Fourth, Lo-Fi gave us Seattle-based TERMINATor’s popping punk (Instagram; got a link to their music? put it in the comments). The three-piece: Veronica Dye on drums and flute, Albie on guitar (with hat), Lauren on guitar also (no hat). Veronica looped her flute in for some songs, which gave the music a psychedelic edge, especially with Kevin Blanquies’ colorful, trippy TV static-ish visuals in the background. TERMINATor is currently filming a visual album, which sounds promising and super cool. We take back what we said about all USians in the preceding paragraph; these musicians, who aren’t afraid of challenging listeners while still delivering pleasing pitches, could totally play with confidence in Guadalajara. The looping flute (a simple three-note phrase) added some rhythmic risk. Not all is stable and predictable in corporate FVEY land. 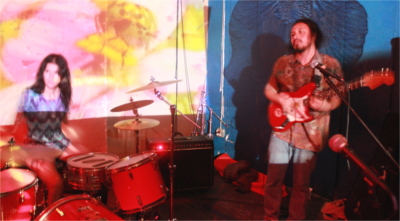 Fifth, Lo-Fi offered Mindhala (Bandcamp), an instrumental Guadalajaran band. Victor’s Stratocaster described long, tender arcs above the urgent bossa-like grooves of Anton on bajo electrico and Nathalaia on drums. Some of the fastest notes of the night came from Victor, Anton brought skill to his hammer-ons, and Nathalaia, who would go on to drum for Uay and Neptuna later in the evening, was just getting started with her ample abilities. It would be great to hear Seattle-based rock bands experiment with bossa beats and more technical playing. 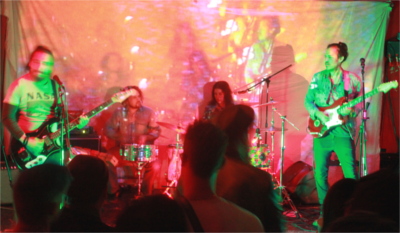 Antepenultimately, Uay (YouTube; got more links, put them in the comments please!). This Guadalajaran band serves as a cool example of how Guadalajaran rock tends to differ from rock from the FVEY states. Unlike USians in general, Uay has no fear of vocal harmonies, stomping the kick drum every beat, using major intervals to build riffs, and rumbling regularly on the toms. Chaka (in his NASA T-shirt!) laid down powerful bass-playing that matched Nathalia’s hard-hitting drums. Kieran added extra percussion with a second snare; all this rhythm inspired a woman up in the balcony to dance in sexy circles. Vocals came from guitarist Oby and Nathalia (which made two drummers singing that night). This writer is predicting more great music from all these Guadalajaran musicians in the future and wouldn’t hesitate to hear them play again. Gotta make sure the orange boy-king doesn’t actually build a stupid wall, so that can happen. 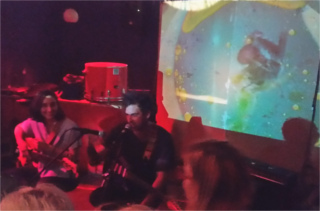 Penultimately, guitarist-vocalist Omar Shambacher’s Great Spiders (Bandcamp) played some thoughtful pop tunes with a bassist (know her name? leave it in the comments). This pensive music served as a nice breather between the louder UAY and Neptuna. It encouraged this writer sit down and rest for a few minutes, thinking over the night and being glad to live here in this corner-of-the-map city. Heartfelt songs long developed, Great Spiders sounded comfortable for FVEY-raised ears without sounding completely conformist either. 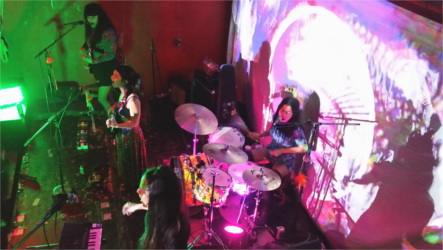 Ultimately, Flower Fest 3 closed with Neptuna (Bandcamp), four women from Guadalajara, all of whom sang as in the image from the balcony. The reliable, powerfully playing Nathalia drummed yet again, but this writer failed to get the names of the bassist, keyboardist, and guitarist (know them? by now you know where to add ’em). Nathalia frequently kicked on each beat in that Mexican style as the women sang in exquisite Spanish. Neptuna also makes use of rests (silent pauses in the music), something FVEY rockers all too often leave out. Go check out their Bandcamp and spring for the album Mar Rojo (Red Sea); this writer just did.

All the bands were totally enjoyable, but the Guadalajran music sounded more of a nation, fluxing and changing with vibrato and rhythmic variety…whereas the Seattle music was a bit more square, a bit more predictable, a bit more of uber-state Five Eyes. Travel generally enhances art, so remember, no bad borders, no wrong walls…

Flower Fest 3 at Lo-Fi: Seattle meets Guadalajara by Douglas Lucas is licensed under a Creative Commons Attribution-NonCommercial-ShareAlike 4.0 International License. It does not affect your fair use rights or my moral rights. You can view the full license (the legalese) here; you can view a human-readable summary of it here. To learn more about Creative Commons, read this article. License based on a work at www.douglaslucas.com. Seeking permissions beyond the scope of this license? Email me: dal@riseup.net.