This post is the second in a series of ten about my experiences at Clarion West Writers Workshop in 2008. I’ll talk about the weekend I spent there just before the workshop began in earnest; it was the weekend of the 2008 Locus Awards and the 2008 Science Fiction Hall of Fame Induction Ceremony. Part 1 of this series is here. I ended Part 1 with my blast-off to the mysterious space station in geosynchronous orbit above Seattle, where the workshop is held. 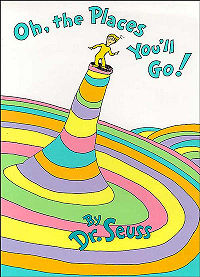 As American Airlines rocketed me out of Earth’s atmosphere, I read Peter Straub’s 1977 novel If You Could See Me Now — until I discovered the paperback was missing a page. Which wasn’t at all unnerving. Everything else was packed perfectly, and I had a journal in hand. Everything, I was convinced, would turn out right. The places I’d go!

The space station’s docking bay looked exactly like Sea-Tac Airport. Pamela Rentz, a fellow Clarionite (that is, Clarion student), waited patiently outside the airport to pick me up. I found her, and she drove herself and me to the workshop dormitory. The entire trip, we pretended not to be nervous..

At the dorm, the fantastic Neile Graham, one of the two administrators (the other is the equally fantastic Les Howle), welcomed us. Neile gave us the basic what’s-up, then left us to pick our rooms. I quickly nabbed the largest one (which was on the top floor); I like a lot of space for my busy mind to stretch out. There was indeed a lot of space: two large closets, nine chests-of-drawers, no joke! The only disadvantage was the heat pouring in through the long many-windowed wall. I figured, though, that the room couldn’t get any hotter than my home state, Texas. Also I realized I’d be on the side of our dorm nearest the rowdy frat neighbors, but as it turned out, their late-night drunken war-whoops never bothered me. I like zoology.

Next I explored the dorm. A Lovecraftian maze. Passages winding around, staircases leading nowhere … I exaggerate, but just slightly. Once Clarionite An Owomoyela arrived, she stuck Post-It notes — such as the one pictured here — on several of the doors in order to signal which room was which. The notes remained in place all six weeks, thank God, because they helped me see my destination through the gauze-of-exhaustion vision that Clarion inflicts.

After my reconnaissance, I made haste to seize as many items from the administrators’ stash as could possibly help me. First and foremost: fans. The majority of Seattleites are air-conditioning atheists, a belief system quite unfamiliar to me. Some nights my room would become so sticky and sweltering with heat that I’d wake up sweating. We have muscular heat ourselves in Texas — most of us just don’t prefer to sleep in it. The fans helped, some; I had my family ship me two small Honeywells to add to my fan fleet.

That brings up a point. My family shipped me the fans because I had little free time. Which was great: I was there to work. But some of my friends never grasped the workload Clarionites experience. (“Why didn’t you see such-and-such in Seattle?” they still ask.) Weekdays we’d closely critique about 15,000 words of stories — about 50 pages of a trade paperback — at the same time as we wrote our own stuff. That doesn’t count class, the optional lectures, the once-a-weekend parties, the all-important middle-of-the-night discussions in the hallway about Faulkner (hi, Jim!) or Theodore Sturgeon (hi, Owen!) or Ray Bradbury (hi, Pritpaul!) … Some found time to goof off — watching Flight of the Conchords was quite popular, for some reason unbeknowst to my all-too-serious mind — but for the most part, I didn’t get much goofing done. I worked harder at Clarion than I did earning my BA (and I earned rather good grades in college).

One thing I grabbed from the administrators’ stash was a personal printer. We emailed copies of our stories to Kinko’s for mass printing, and the dorm had a functional network printer I could have used if I really needed to, but for psychological comfort, I wanted a printer in my own room. I tend to print my writing a lot, to make notes and corrections by hand. Future Clarionites of similar psychological persuasion: when you get there, grab a printer from the stash, quick! 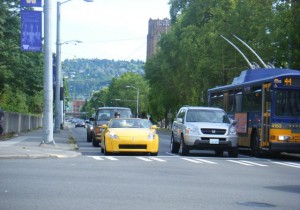 That Friday, the Clarionites who’d already arrived went to The Ave — a shop-lined street in Seattle’s University District. Ah, Seattle, now my favorite city; of course, I view it with extremely favorable bias. I’m not sure how to adequately synopsize the effect that living somewhere other than my familiar Texas had on me. Travel does not give you the same experience. Living in Seattle I learned firsthand how many other possibilities there are in the world, and how people elsewhere take different things seriously — and aren’t necessarily ostracized for it. Even the small things: in Fort Worth, I carry a book with me, and strangers at best ask if I’m in school; in Seattle, it’s not uncommon to see others carrying books (the picture below shows the fiction magazine section at a small shop — I remember they had, for example, Cemetery Dance). Six weeks living in Seattle aged me mentally six million years for the better.

On The Ave, at whichever restaurant it was that we chose, we made nervous conversation (well, at least I felt nervous). I suggest to any future Clarionites, get to know everyone in your group! De jure and ex cathedra: you’re all a bunch of lovable weirdos. =)

If I remember correctly, it was later in the day that Locus held their 2008 Awards ceremony at the Courtyard Marriott Hotel, and most of us Clarionites attended, wearing, like most everyone else, the event’s traditional embarassing Hawaiian shirts. Then, we went to the University of Washington campus, where Nancy Pearl interviewed William Gibson, an event well-blogged by Brenda Cooper here. After that, a Clarion West reception. There David G. Hartwell told me a tidbit about Theodore Sturgeon teaching at Clarion East in, I believe, 1970: according to Hartwell, Sturgeon said a good way to start characterizing fictitious characters is to think about their professions and how they spend their typical days.

Which is exactly what I started thinking about as Clarion West 2008 began.

This post is the second in a series of ten about my experiences at Clarion West Writers Workshop in 2008. I’ll talk about the weekend I spent there just before...