Too many drastically overestimate their skill at discerning details of audio such as music. Listen to this basic A major guitar chord:

Can your ears “reach into” the chord and pick out all three notes? (Test yourself by singing or humming each one individually.) Or do you just hear the chord as a composite? It’s easier when someone plays the notes together and then separately, as above. If you want a real challenge, go mash down a bunch of random piano keys (a “tone cluster”); then, without releasing the keys, try to sing or hum each note separately.

Do you hear a few huge, blocky piano chords, or do you hear hundreds of individual notes also? Serious music students have a hard time distinguishing all the different notes, too, so much so that they sometimes refer to ear-training courses as “fear-training” or “ear-straining.”

My understanding — and this might be wrong — is that, with chords, the mind (on some level at least) hears both composite sounds and individual tones at once, always. So maybe in your subconscious you’re hearing it all. I’m still leaving out overtones and features such as vibrato. 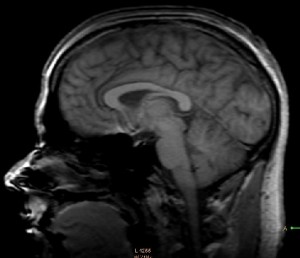 This is my brain. Not joking; the MRI people copied me a DVD.

I’m also unsure of whether the conscious mind, hearing chordal music, rapidly switches its focus from one individual note to another (and the composite waveform) or if it’s truly capable of hearing multiple tracks at once. (If I had to guess, I don’t think the conscious mind attends to much of anything with perfect simultaneity, when you drill down to individual instants, simply due to latency limitations of the physical nervous system.) For whatever it’s worth, computers can only complete one task at a time — they just switch between them so quickly we imagine they’re “multi-tasking.”

Even when people don’t have good ears for music (by which I don’t mean they’re literally tone-deaf, just that they aren’t highly skilled at perceiving details of audio), we typically say they can identify for themselves whether a piece of music is “good” or not. Of course it’s really their subjective experience of the music that they’re labeling as good or bad.

We don’t extend the same leeway to people evaluating visual art, however. We don’t expect someone with bad vision (and no corrective lenses) to make astute judgments about a painting they can’t see well. (A good way to train the eyes, by the way, is field-guiding.)

Why the double standard? I think because most of us are more familiar with sight; most of us live our entire lives without wondering about our ability to discern pitches in the audio we take in.

Once, a long time ago, my friend Bryan told me he only heard heavy metal as a kind of static-y noise. He couldn’t identify its pitches; later, after repeated listening, he could hear them. Try it yourself: here’s an instrumental Metallica song, Orion, as originally recorded. Skip ahead to :56 if you want to cut to the chase and get past the quiet intro.

Do you hear the bass guitar and the multiple notes of the multiple guitars? Or is it just one moving block of sound with drums banging away? People do in fact hear it quite differently. Now try the same (well, practically the same) music played on piano (by the fantastic Vika Yermolyeva). Generally people hear pianos more clearly than other instruments.

I think current research says babies are pretty much always born with perfect pitch, also known as absolute pitch — the ability to distinguish and name notes. To someone with perfect pitch (who has also learned the Western musical alphabet), a guitar string vibrating at 440 hertz produces an A, not just a sound. (Perfect pitch doesn’t mean singing in tune; it might help someone sing in tune, but perfect pitch is a perceptual skill, not a skill involving the voice box, diaphragm, tongue, etc.) Growing up, children aren’t taught to associate the notes they hear with a musical alphabet, and so their perfect pitch fades away. Some adults can indeed learn it, though.

Too many drastically overestimate their skill at discerning details of audio such as music. Listen to this basic A major guitar chord: Can your ears “reach into” the chord and...