Note: Edited by this selfsame writer in year 2020. 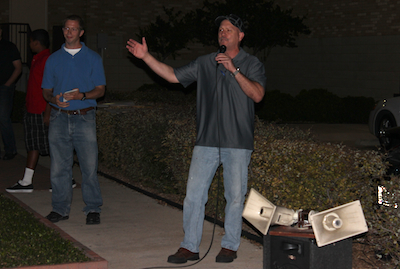 This Friday evening a group of maybe twenty folks have assembled at the corner of Berry and Cockrell to proselytize for Christianity; I happened to pass by and jump into live-blogging mode. The speakers from the group, some using English and one Spanish, have been speaking into a hand-held microphone and through a portable PA for easily an hour counting. They’re passing out pamphlets identifying themselves as The Door Christian Fellowship.

The pamphlet handed to me says, among other things, “Are your hopes and dreams unraveling? Are your finances stretched to the breaking point? We Care! and We Can Help! Join us for Life-Changing Services. Find out why Jesus Is The Answer!” It gave an address in Texas, along with a phone number. 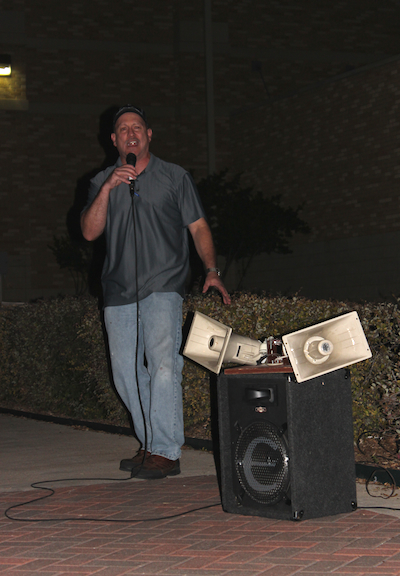 They picked this particular street corner for obvious strategic reasons. It’s catty-cornered by the Texas Christian University strip, where clubs, restaurants, and the like entertain students. I don’t know if the group got a permit, or if they needed to, technically, or not. People walking or driving by have expressed various reactions — mostly happy honks and cheers, but a few jeers and some “SHUT THE F*#) UP”s. 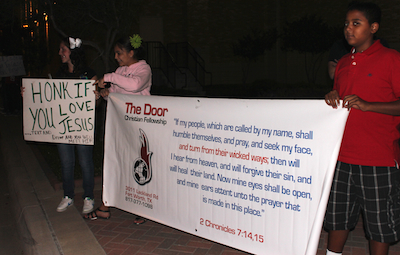 Here are some quotes from the speakers, 90+% accurate.

They’ve just now put away their gear and dispersed. As they were packing up — I was typing this from the patio of Stay Wired! Coffeehouse and Computer Services — a guy and girl walked by, dressed up as Jedis, complete with lightsabers. Works for me. 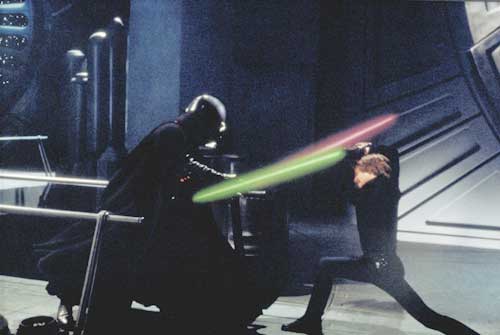 Used without permission; please don’t go after me, buy Star Wars instead.

Note: Edited by this selfsame writer in year 2020.   “YES, MY FRIEND-uh” This Friday evening a group of maybe twenty folks have assembled at the corner of Berry and... 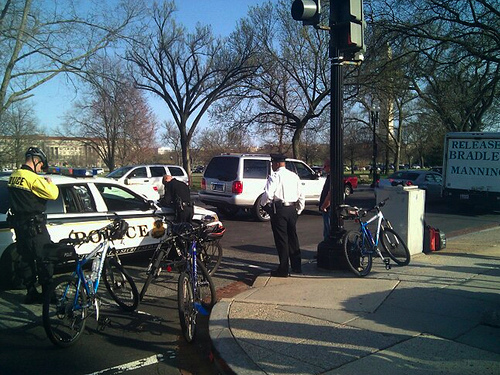 Hopefully you’ve read my prior post about searching WikiLeaks cables for literary topics, which WikiLeaks linked to on Twitter. If not, go read it real quick; I’ll wait.

Okay. At the time of that post, WikiLeaks was still redacting the US State Department cables they’d published, in conjunction with other media partners. A redaction is a removal of sensitive information from a document — in this case, mostly the names of informants (sometimes whistle-blowing informants, sometimes ill-intentioned informants). The worry motivating redactions was that bad guys (for lack of a better word) would retaliate against informants for their interaction(s) with the State Department. Just a few days after my post, WikiLeaks published all 250k+ of the State Department cables, raw, without redactions. Whoa, what happened?

When WikiLeaks was originally working with media partners on Cablegate, editor-in-chief Julian Assange gave an encrypted file of the cables to Guardian journalist (and confessed phone hacker) David Leigh, who later printed its password in his book (which prompted x7o to remark “#idliketothink that if JA had given me the password for cablegate, it wouldn’t now be the title of a chapter in an international bestseller”). The Guardian denies wrongdoing, claiming WikiLeaks told Leigh the password was temporary, which is technically impossible and not the sort of thing an elite cypherpunk such as Assange would mistakenly say. Other disasters, some not nearly as flagrant, combined and led to the file’s decryption by the dark sub-floor of the Internet.

Pretty soon all of the unredacted cables were springing up on websites (including at least one with a customized search engine), and taking up residence on popular file-sharing services. Therefore anyone motivated enough could locate them; some debate just how easily non-technical people could locate the unredacted cables, but really, it’s not that hard — especially for foreign intelligence agencies, computer-adept terrorists, etc.

PJ Crowley, State Department spokesman on the cables issue earlier this year, told AP on the 30th of August, 2011 that “any autocratic security service worth its salt” would probably already have the complete unredacted archive.

Two weeks ago, when it was discovered that information about the Leigh book had spread so much that it was about to be published in the German weekly Freitag, WikiLeaks took emergency action, asking the editor not allude to the Leigh book […]

WikiLeaks advanced its regular publication schedule, to get as much of the material as possible into the hands of journalists and human rights lawyers who need it. WikiLeaks and its partners were scheduled to have published most of the Cablegate material by November 29, 2011 – one year since the first publication. Over the past week, we have published over 130,000 cables, mostly unclassified. The cables have lead to hundreds of important news stories around the world. All were unclassified with the exception of the Australian, Swedish collections, and a few others, which were scheduled by our partners.

WikiLeaks has also been in contact with Human Rights Watch and Amnesty at a senior level. We contacted the US embassy in London and then the State Department in Washington on 25 August to see if their informant notification program, instituted last year, was complete, and if not, to take such steps as would be helpful. Only after repeated attempts through high level channels and 36 hours after our first contact, did the State Department, although it had been made aware of the issue, respond. Cliff Johnson (a legal advisor at the Department of State) spoke to Julian Assange for 75 minutes, but the State Department decided not to meet in person to receive further information, which could not, at that stage, be safely transmitted over the telephone. 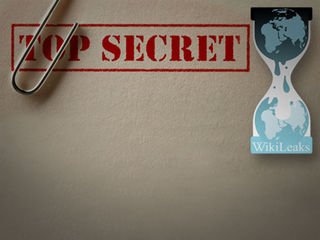 This is getting intense

Though these comments seem clear enough at first glance, they left some things unknown. Did WikiLeaks publish Cablegate2 to protect sources, as Glenn Greenwald stated? If so, how does the publication protect sources? What does Human Rights Watch and what does Amnesty International make of Cablegate2, and what did they advise WikiLeaks? Inquiring minds who have been supportive of WikiLeaks (a risky, though legal, thing in the US) deserve to know the full reasoning behind the Cablegate2 publication, I think, without any big steps in the argumentation left for educated guesses.

Some answers arrived today in a New Scientist interview with Assange. He specified three independent justifications for publishing Cablegate2.

When WikiLeaks first published Cablegate2, I, like WikiLeaks Crowd-Sourceress Asher_Wolf, had (and have) several concerns. Here are mine:

You might respond that the first three concerns above can’t be redressed given WikiLeaks’ limited resources and the quantity of the cables, or maybe that redressing the three concerns isn’t WikiLeaks’ proper role as a conduit for whistle-blowing leakers, or maybe that addressing them would cause legal problems or PR problems for their brand (their reputation affects whether whistle-blowers trust them). I can understand those responses, though I’m not sure how to fully evaluate them. I do think WikiLeaks needs to do more for the named, whistle-blowing informants.

But after today’s New Scientist interview, I do feel that on balance, WikiLeaks did the right thing by publishing Cablegate2. I hope, however, that people and organizations of sufficient importance work toward protecting the named, whistle-blowing informants, and that Human Rights Watch and Amnesty International weigh in publicly on WikiLeaks’ Cablegate2 publication (in which case I’ll consider their reasoning). After all, WikiLeaks followed the computer security community’s practice of widely publishing threats (viruses, etc.) that are already out in the wild since doing so, despite risk, solves problems more quickly; yet, assuming the same strategy extends to protecting people offline might be a problematic example of what Evgeny Morozov calls Internet-centrism: relying too much on technical knowledge when addressing problems not adequately described in technological terms.

As Clay Shirky says, in the United States, publishing leaked documents is basically legal (see New York Times v. United States as well as the First Amendment); it’s leaking them that’s often illegal (and risky). Today the Internet has lowered the costs associated with publishing. We with Internet connections are all now publishers, though not all journalists. While instituting legal licensing to determine who gets to be a publisher would be ridiculously bad for freedom, our larger bullhorns — especially those of the more prominent netizens among us — come with more serious responsibility than might be first imagined.

Older generations, I think, see publication itself as some measure of approval of the published content; in this view, WikiLeaks publishing the unredacted cables amounts to the organization approving of the lack of redactions. This view makes a degree of sense in the past world where the process of publication was expensive, time-consuming, and relatively uncommon.

But now, to use two metaphors each from a different science fiction writer (William Gibson, then Cory Doctorow), with the Internet the human race has sprouted an information exoskeleton, an outboard brain. If the principle “non-secure, online info available anywhere is available everywhere” isn’t completely true yet, it will be more or less true within a decade or, at most, two. This is the ideology of radical transparency. WikiLeaks is helping to usher in a world where not writing down secrets (or typing them out) will be the only way to keep them. That world, I think, will be one of reduced secrets and, accordingly, a better, more just one.