This post is the eighth in a series of ten about my experiences at Clarion West Writers Workshop (Wikipedia; Twitter) as a member of the 2008 class. I’ll talk about the final week of the workshop, Week 6, when Chuck Palahniuk (Wikipedia; Twitter) instructed. (It’s pronounced PAUL-uh-nick.) Here are Parts 1, 2, 3, 4, 5, 6, and 7 of the series. In Part 7 I talked about Sheree R. Thomas‘s week and the beach reunion my class held in October 2011 in San Diego. We’re tentatively discussing another reunion now — maybe Las Vegas or Portland.

I should note that on August 31 2009, my Clarion West comrade Pamela Rentz said as a comment to Part 3:

Cool! At this rate you’ll have the workshop covered by 2012.

Of course, Week 6 was the last week, so this should be it, right? Except for the remaining Parts 9 and 10. I think Part 9 will be my last remarks on the ’08 workshop plus a report from our forthcoming reunion. I should also write about the surprise guests we had at the workshop who gave talks or taught for just a few hours. Part 10 will just remain open; you never know what might happen. 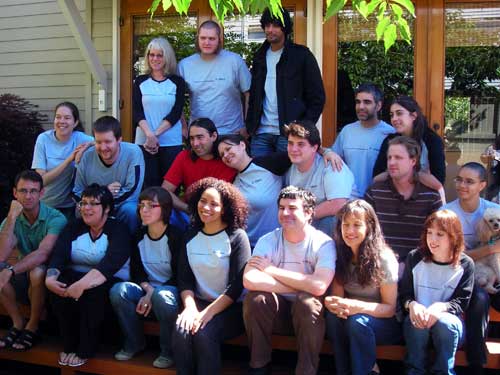 Chuck Palahniuk — or “Chuckles,” as we began calling him before he arrived, perhaps in an effort to defuse his celebrity power — was the most wildly creative of our instructors. Leading the workshop, he took the day’s stories and came out with several ideas for each, some off the top of his head, ways to make them more powerful: this scene could mirror that scene if you change this about the setting, or this object one character carries around could also be used in another instance ironically, or other more powerful uses for motifs and structure. His mind was so flexible; he could invent possibilities for the formal properties of a story so felicitously. If you’ve read Orson Scott Card’s How to Write Science Fiction & Fantasy, you probably remember Card’s “Thousand Ideas in an Hour”; Palahniuk has the same fecundity.

Here’s an example. His week I turned in a short story about a mentally ill son and his mom. The mom wrote poetry with a favorite fountain pen, and during an author reading at a bookstore the son took the pen from her and crazily insisted on writing with it while talking aloud, becoming a social nuisance. Palahniuk pointed out that the pen could explode and cover the son’s arm with Rorschach-like inkblots. The pen is a tool for creativity; the pen, like his mind, breaks; control of the pen is contested, just as control of the son’s life is contested. This was just one of the twenty-something ways he came up with for amping up what was already in my story. Hearing him do this, you couldn’t help but learn some of the ability yourself. Afterward you read real-life stories better too, interacting with people and catching on to their recurring motifs or themes.

I notice the manipulation of formal story properties (character, setting, etc.) a lot while watching TV shows. Lost or The Twilight Zone come to mind. But writing is not contained by formalist wizardy. Sometimes writers just create mood (think of JD Salinger) or just wonder (think of Haruki Murakami) or tell you what’s what (think of Philip K Dick talking about God). And that’s all great, despite the business-like emphasis of some writing instructors on “Make everything in the story perform multiple functions, OMG, we gotta be economical here to turn a profit.” It got on my nerves the way Chuckles constrained everything as if there’s one true way to write. Art and sex are some of the only areas in life where you get to escape rules; people, especially those giving advice, just want to bring rules in because it reduces uncertainty — at the cost of quality and freedom. (Gay Saul Morson’s Narrative and Freedom: the Shadows of Time is a great critical theory book about how traditionally structured narrative clamps down on possibilities and the sense of freedom in fiction.)

He had plenty of rules for sentences, many of which are often totally helpful. Here’s a list of some. (Pam Rentz noted some others.)

Here is some other advice he gave to the workshop or to me in the one-on-one conference. Same caveat (from me) as above about “rules.”

The class gave the instructors gifts, and for Chuck Palahniuk we created something — I can’t quite remember what — that he had to dissect, a fit for his shock jock style. See picture below; here is the complete set. 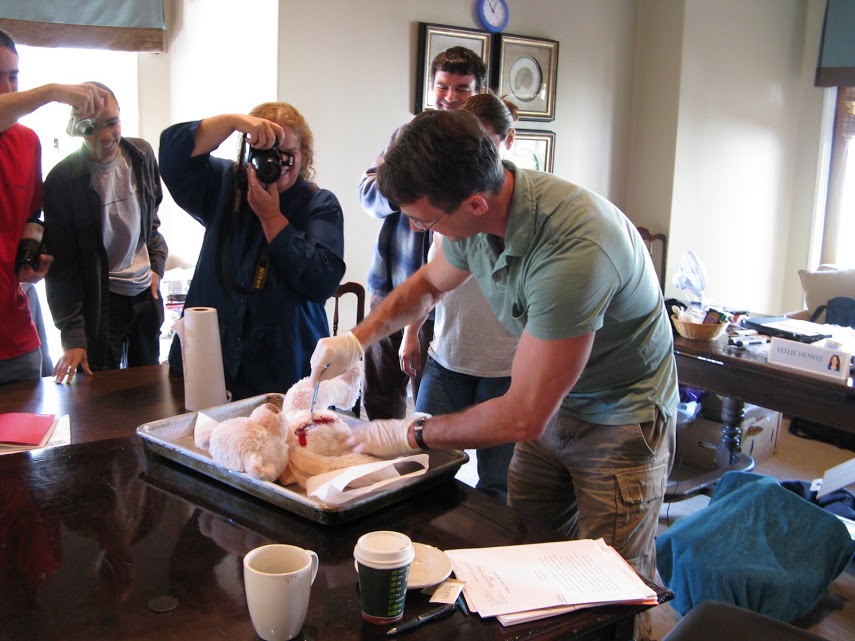 For some reason during Week 6 it was important to me to question Chuckles about his insistence on rules. Not sure why I cared about doing that so much. He did tell me at one point that writers tend to come from one of two backgrounds: journalism or academia. The former are more amenable to rules, he suggested (the miniaturist, Amy Hempel style he prefers). This makes a bit more sense to me now since I’ve sold some journalism pieces and other freelance material; editors want stuff that’s easy-to-read and efficient. But the business mindset shouldn’t overtake art.

Shane Hoversten wrote an amazing story for this final week. It was a farewell story for our class. He included each of us as characters. He imagined me getting drunk at the workshop (I rarely drink), saying stuff about lyrical prose and olfactory sensory details, and passing out. :)

Since the workshop some people have asked me what Chuckles was like as a person. He was reserved compared to our other instructors, who mingled with us more. Probably that was partly because it was his first time to teach at a Clarion; he’s taught at Clarions more since 2008, so I wonder if he socializes more now. He really cared about helping us, and enjoyed teaching. I learned a lot from him.

I’ll write up concluding thoughts about the workshop in Part 9, if I ever get around to it!

Clarion West 2008 – Part 8 of 10 by Douglas Lucas is licensed under a Creative Commons Attribution-NonCommercial-ShareAlike 3.0 Unported License. Based on a work at www.douglaslucas.com. Seeking permissions beyond the scope of this license? Email me: dal@riseup.net.

This post is the eighth in a series of ten about my experiences at Clarion West Writers Workshop (Wikipedia; Twitter) as a member of the 2008 class. I’ll talk about...