On November 10 I rounded up a bunch of stuff, inspiring and relevant literary material mostly, and donated it to Occupy Dallas (Twitter; Facebook). 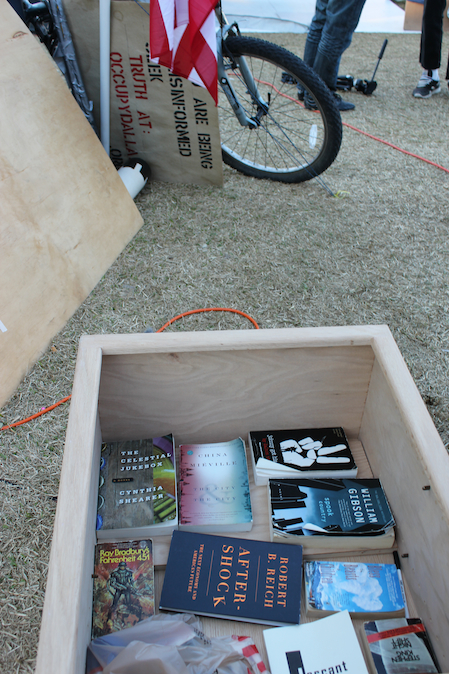 Books (and bookcase and bag) I donated to Occupy Dallas

Here’s a list of the books I gave, and why I thought them pertinent. All are fiction except for the Robert Reich.

I wanted to include More Than Human by Theodore Sturgeon, but I couldn’t find a copy. 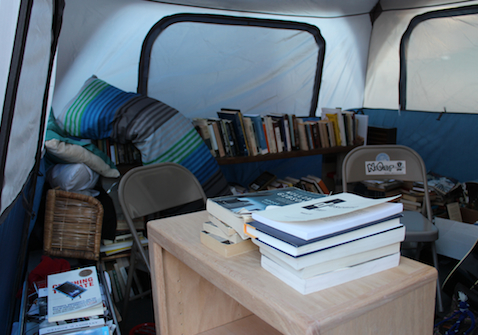 The books went into the tent above; the guy who received the donations told me they’d probably use the bookcase elsewhere. I wonder who read the books and what they thought and if it made a difference.

Capitalism great system. We won Cold War because people behind Iron Curtain look over wall, and see how much more plentiful and delicious cookies are in West, and how we have choice of different bakeries, not just state-owned one. It great system. It got us out of Depression, won WWII, built middle class, built country’s infrastructure from highways to Hoover Dam to Oreo factory to electrifying rural South. It system that reward hard work and fair play, and everyone do fair share and everyone benefit. Rich get richer, poor get richer, everyone happy. It great system.

Then after Reagan, Republicans decide to make number one priority destroying that system. Now we have system where richest Americans ones who find ways to game system — your friends on Wall Street — and poorest Americans ones who thought working hard would get them American dream, when in fact it get them pink slip when job outsourced to 10-year-old in Mumbai slum. And corporations have more influence over government than people (or monsters).

That what the soul-searching about. When Liberals run country for 30 years following New Deal, American economy double in size, and wages double along with it. That fair. When Conservatives run country for 30 years following Reagan, American economy double again, and wages stay flat. What happen to our share of money? All of it go to richest 1%. That not “there always going to be rich people”. That unfair system. That why we upset. That what Occupy Sesame Street about.

2010 article from Business Insider: 22 Statistics That Prove the Middle Class is Being Systematically Wiped out of Existence in America.

2011 article from Business Insider: Charts: Here’s What Wall Street Protestors Are So Angry About.

Occupy Dallas footage uploaded to YouTube (by someone else) on Nov 19, 2011:

Book Donation to Occupy Dallas by Douglas Lucas is licensed under a Creative Commons Attribution-NonCommercial-ShareAlike 3.0 Unported License. Based on a work at www.douglaslucas.com. Seeking permissions beyond the scope of this license? Email me: dal@douglaslucas.com.

On November 10 I rounded up a bunch of stuff, inspiring and relevant literary material mostly, and donated it to Occupy Dallas (Twitter; Facebook). Books (and bookcase and bag) I...