Divorcing, I’ve been going back to a lot of material from my earlier life, especially my teenage years when what other people said didn’t matter to me so much; in a marriage, or at least in mine, you are constantly having to compromise, appease, and betray yourself.

One thing worthwhile I salvaged from my teenage interest in the noxious ideas of Ayn Rand is the W.T. Jones History of Western Philosophy series. Jones was a philosophy professor at Caltech, and his otherwise little-known five-volume set became a bit more popular outside academia after Rand’s followers promoted the books. 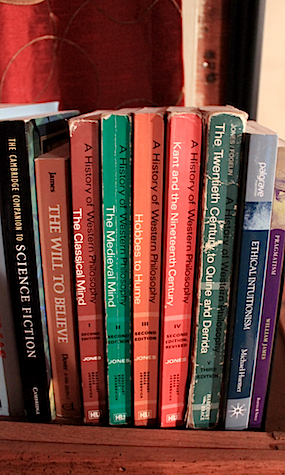 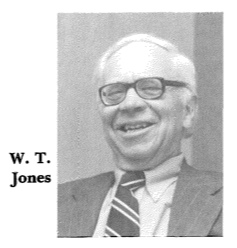 All this philosophizing about life, on my and Jones’s parts, and I don’t even know who this guy is! I tried to read up on him tonight, but found little online. A retirement bulletin from Caltech explains helpfully that he specialized in world views, taught at Pamona College prior to Caltech, wrote seven books, and received several honors: he was a Rhodes Scholar, a Guggenheim Fellow, a Lippincott Fellow, a Proctor Fellow, a Ford Faculty Fellow, and a Phi Beta Kappa Visiting Scholar. The bulletin also quotes him as writing in 1977 that “One of the great aims of education should be to help students learn how to enjoy — enjoy, not merely tolerate — cognitive dissonance, cognitive ambiguity.” Very wise indeed.

A Seattle Post-Intelligencer article from 1986 reveals that his son, Jeff Jones, is a playwright. Jeff Jones wrote a collage-like play built from beach movies, Bible movies, Plato, and Latvian folk music. The article calls it a “beach biblical ancient Greek Latvian epic,” and it is part of a series the younger Jones titled, with apparent impishness, “A History of Western Philosophy.” (He also mentions going to therapy.)

I’ve been (re-)reading the elder Jones’s History of Western Philosophy almost every night just before turning off my iPhone flashlight. Aristotle definitely helps me fall asleep. Once I wanted to read the Copleston eleven-volume History of Philosophy — Copleston was a Jesuit priest — but in that series there are no translations for the plentiful Greek. Although I know some koine, Copleston’s Greek was still … Greek to me. An acquaintance has been asking why I’m wasting my time reading a history of western philosophy that isn’t Bertrand Russell’s. Because I’ve been told Russell is very opinionated in his presentation, whereas Jones quotes primary sources extensively and provides good context and what seems to be fair and only a little analysis. 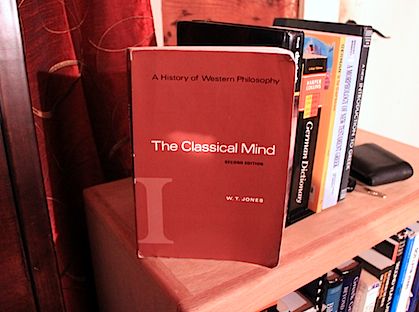 Volume 1: The Classical Mind, by my bedside

There is really not much online about Jones, and little of his personality in his very objective, mostly humorless history. However, sometimes Jones reveals himself with his examples:

But is Plato’s psychological analysis of human nature correct? Is his account of the form “man” adequate? It seems clear that people who suffer from hangovers should not drink to excess and that people who have a tendency toward indigestion should not overeat. But one hardly needs to be a philosopher to discover this. How is Plato’s theory to deal with the man with a cast-iron stomach who prefers lobster to lyrics, boogie-woogie to Bach, and sitting in the sun to differential equations? We may agree that such a man is not living a well-rounded life, but are we justified in telling him that he is less happy than the man who lives a well-rounded life?

We could say, of course, that the man who prefers boogie-woogie to Bach simply doesn’t understand Bach. This line of argument is not without force. Bach is difficult; where the untrained ear hears only noise, the musically educated ear hears “exquisite harmonies.” Hence it is not surprising that a great many people prefer boogie-woogie. If, however, they were to study music, they might find that an increased musical appreciation repaid them for their trouble. But suppose that, after devoting some time to Bach, the man who prefers boogie-woogie says, ‘Well, I still don’t see anything in classical music.” We might be tempted to reply, “If you don’t, then so much the worse for you.”

This retort discourteous is, of course, not conclusive, and Plato would not have wanted to rest his case merely on the possibility of cultivating one’s taste. He wanted to maintain that the nature of man really is what he described it to be and that the man who doesn’t find it so is mistaken, not merely deficient in taste.

I’m going to read W.T. Jones’s History of Western Philosophy and sit in the sun at the same time!

Jones, W. T., History of Western Philosophy, Keep Me Company by Douglas Lucas is licensed under a Creative Commons Attribution-NonCommercial-ShareAlike 3.0 Unported License. Based on a work at www.douglaslucas.com. Seeking permissions beyond the scope of this license? Email me: dal@douglaslucas.com.

Divorcing, I’ve been going back to a lot of material from my earlier life, especially my teenage years when what other people said didn’t matter to me so much; in...

Literary Cablegate, Number 2 of Many
WikiLeaks STRATFOR Leak — Are you in Austin? Contact me!